How to Throw Darts

To apply this knowledge to our throw, we need to understand how our arms work when we make dart throwing. The best way to do dart throwing is to think of your arm as a machine. This machine is made up of three levers (your hand, forearm, and upper arm), these three levers are attached by joints (your wrist and elbow) and at the end of this machine is another joint attaching the machine to a fixed point (your shoulder). Below is a picture of this machine. 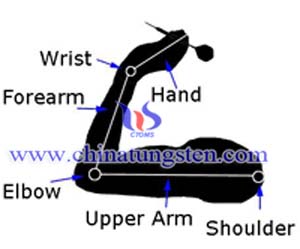 How to throw darts

Now if you have any mechanical engineering in your background, you will know that with a machine like this it is possible to draw any possible curve within the range of the machine. Now let's see how the arm looks in motion when you are actually make?dart throwing. 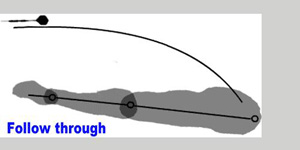 Let's take a closer look at this animation together because it's very important in dart throwing. Notice how in the animation the shoulder does not move? When you are doing dart throwing, the only part of your body that should be moving is your arm. Moving down the arm we come to the elbow. Notice how the elbow doesn't move much in the begining phase of the throw but starts to move up during the acceleration phase. This is very important to keep our arm moving along the curve. If we tried to keep the elbow stationary, we would be forced to release the dart earlier. By moving the elbow during the throw, it enables us to guide the dart along the curve for a longer period of time increasing our accuracy.

Finally we come to the wrist. In this animation the wrist doesn't do much, and your wrist doesn't have to do much for a good and proper throw. Many players do use more wrist in their throws though; this is for accelerating the dart. By using a snap of the wrist for acceleration, it means that you can slow down the rest of the motions and thereby increase accuracy. Beginners should be cautious though. While many pros and experienced players do use the wrist for accelerating the dart, it can be a dangerous thing because it is one more thing that you have to control. By allowing the arm to do most of the work you may be better off. The best advice is to begin by letting the arm do the work; this will really help you get used to the motions involved. Once you are doing well, then try adding more wrist acceleration in little by little.

Tungsten dart billets are the rods used for making dart barrels.Today's standard material for barrel is tungsten heavy alloy, and barrel forms the main part of a dart (mainly used in sports).

The most crucial comprises of dart is the barrel. This is the part of the dart you grip when you throw and it also gives the dart its weight. The shape of the barrel will vary depending on where the weight is concentrated.

Tungsten is a very dense material, so darts with a considerable bulk can be made quite slim. The invention of tungsten darts had a big impact on the sport. With the new darts it was possible to achieve much better grouping than before, and the averages in pro games have improved dramatically.

Dart flight is the fins or wings found at the back of a dart, which stabilize the dart during flight and are made of various materials. It is not generate lift, airplane wings generate lift by means of their curved shape, whereas dart flight is flat. They only resist motion away from the centerline of the dart.